Tornado Springs Decoy Hunt, Homage to Philip Guston, 2014 / ink and watercolor on illustration board / 30 x 40.5 in 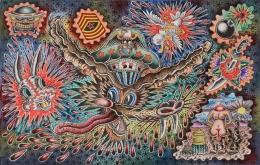 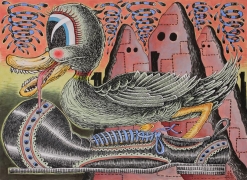 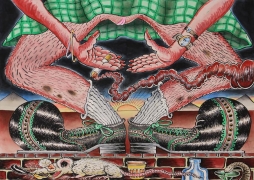 His enigmatic icons combine humorous meditations on violence, sexuality, and beauty, and are rendered with a sophisticated mastery of materials. Roberts challenges himself with a system of irreversible marks, as opposed to the corrections and over-painting of Western traditions, but with the simultaneous precision of his tattoo-artist hand. His work was the foundation of the much-acclaimed traveling museum exhibition “Eye Tattooed America” in 1993, and has been featured in numerous shows focused on mark-making and American Pop Culture.

Roberts' experiences as a musician, biker, and iconoclast flavors his personal work. As a saxophonist, he was part of the milieu of Frank Zappa, in addition to playing with Ruben and the Jets, Hot Tuna, the New York Dolls, and the Offs. He first started professionally tattooing in 1973, while concurrently making his artwork, and is the founder of the famed Spotlight Tattoo in Los Angeles. His paintings have largely enjoyed an underground reputation as a living legend among the international body art community.