The Snake Behind the Wall Revealed (Gold Drip), 2012 / Acrylic and gold leaf on dyed and stretched Gasden flag over panel / 30 x 52 inches 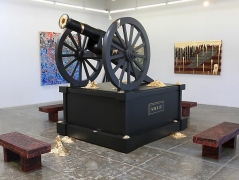 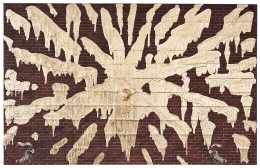 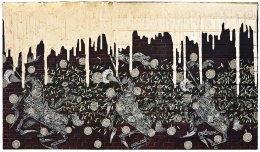 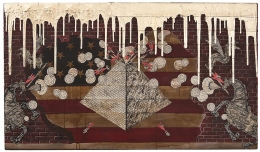 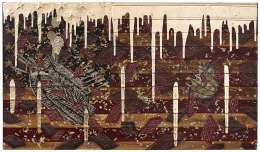 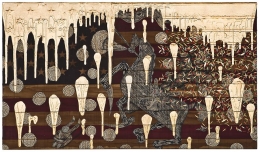 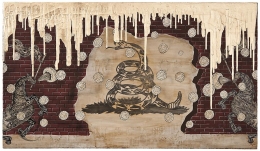 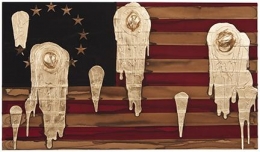 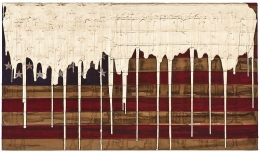 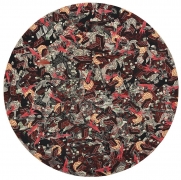 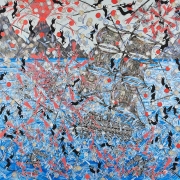 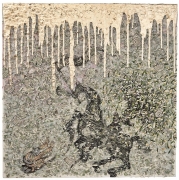 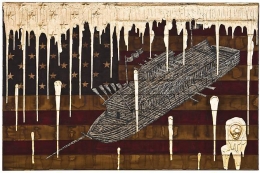 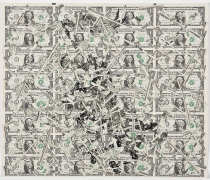 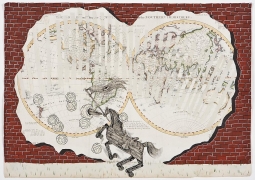 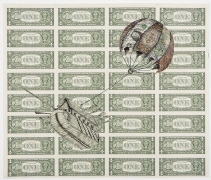 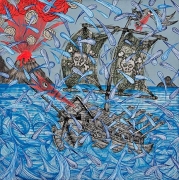 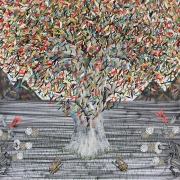 Mark Moore Gallery proudly presents "Fall Out," an inaugural solo exhibition of paintings by San Francisco-based artist, Andrew Schoultz. In this exhibition, Schoultz translates the motifs in his kinetic two-dimensional works into a real scale three-dimensional installation – presenting an interrelated combination of painting, sculpture, drawing, and collage. Referencing the social constructions and implications of a public civic center, museum, or church, Schoultz invites the viewer be seated on his handcrafted benches, and be immersed in the ramifications of our contemporaneous globalization.

Sourcing aesthetic inspiration from 15th Century German map making and Indian miniature paintings, Andrew Schoultz's frenetic imagery depicts an ephemeral history bound to repeat itself. In his mixed-media works, notions of war, spirituality and sociopolitical imperialism are reoccurring themes, which shrewdly parallel an equally repetitive contemporary pursuit of accumulation and power. "Fall Out" primarily investigates the notion of the monumental, both in its commemorative personification of power structures, and the increasingly prodigious consequences of our egocentric consumption. In these works, undulating bodies of water recall the devastating realities of global warming, while American flags stamped with the ubiquitous "Made in China" inscription question our domestic authenticity. Schoultz facilitates a dialogue that is both topical and ageless, and prompts the viewer to navigate a physical and visual space suggestive of our cyclical parochialism. While his illustrated world seems one of chaos and frenzy, Schoultz also implies a sense of alluring fantasy and whimsy - a crossroads vaguely reminiscent of the modern world.