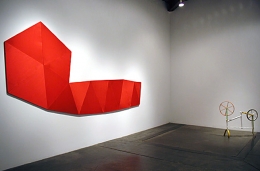 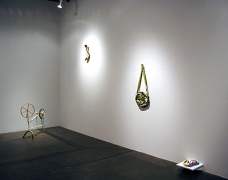 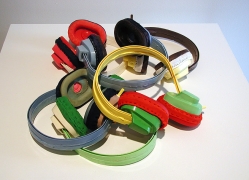 Brad Tucker’s paintings and sculptures tie together color-field painting, early modernist abstraction and a few—very American—loose ends. Playing in garage bands, going on tour, shopping in dime stores and witnessing the less organized aspects of our country are evident in the artist’s intentionally low-tech, ‘do-it-yourself’ pieces. Here the faded colors of thrift shop T-shirts, the shapes lawn ornaments and the closed patterns of skateboard ramps become the basis for abstract wall pieces, while overlooked objects like flip-flops, chunky 70’s headphones and guitar cases are re-cast and re-fashioned as sculptural objects.

Writing in the catalogue for the artist’s 2002 solo exhibition at the Plains Museum of Art, curator Rusty Freeman writes that “Tucker was never interested in a wholesale critique of painting and its canon as much as he was convinced of its potential for future and continual exploration.” As Tucker himself comments, in the essay for the exhibition, Some New Minds, at P.S. 1, art-making is not unlike skateboarding, an activity which has “always involved an existential self-invention.” He writes, “Here you are—your board and the street, which you could reinvent for your own fluid action philosophy. You’re not using the street or the sidewalk for its intended purpose - that is, for driving, walking, or transporting yourself form one place to the next.” For Tucker, art-making, like skateboarding, is about new possibility, chance and the continuing process of inventing from what we find around us.

The exhibition will be the artist’s first solo show on the West Coast. A native of Austin, Texas, Tucker has shown extensively in his home state. His work has recently been seen in solo exhibitions at the Dallas Museum of Art, the Plains Art Museum, as well as galleries in Chicago, New York, Germany, Italy and Spain.