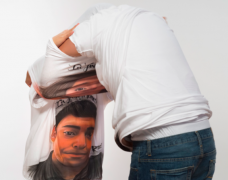 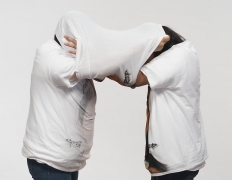 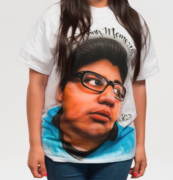 Mark Moore Gallery proudly presents "Chain Reaction," a solo exhibition of mixed-media sculpture, photography, video, and installation by Chicago-based artist Cheryl Pope. This latest body of work is a continuation of the research conducted for her "Just Yell" exhibition in 2013, which investigates segregation, youth violence, power, and privilege as relating specifically to the bodily identity. Throughout the research and production of her work, Pope continues to explore her own mis-education about race, authority, history, and identity all the while searching to deconstruct the sociopolitical systems at play.

Known for its alarming murder rate, the city of Chicago serves as Pope's primary motivation for examining how issues of connectivity and community affect its largely segregated neighborhoods. Works such as "Black_White (Broach)" (2014) visualize the racial tension of the city by literally linking the words "black" and "white" together with faux gold chains – thus creating two large broaches that, if worn, would adjoin two individuals. The interwoven broaches suggest the need for communal dialogue, and also illustrate how the effects of violence on one individual is intrinsically linked to that of another. Her video "One of Many, One" (2014) further delves into the seemingly inexhaustible chain reaction created by gun violence. The video portrays a series of Chicago youth dressing themselves in memorial "RIP" t-shirts. Beginning with an individual putting on one shirt, the video progresses in a similar fashion to a cumulative song – each subsequent youth wears one more shirt than the individual preceding him or her, and each new shirt bears their predecessor’s face. The accumulating loss grows increasingly personal as each successor is faced with the reality that they are next in line to be mourned. Other works such as "Too Young to Die" (2014) and "In Loving Memory (altar)" (2014) metaphorically symbolize the tragic loss of Chicago’s young populations. As an extension of her work, the artist has invited a guest to attend the opening: Britteney Black Rose Kapri, a teaching artist and author of WINONA AND WINTHROP, a collection of poems heralded as "relentless; they push your cheek against the concrete of girl life in the city, and demand you breathe deep." by critic Krista Franklin. Kapri will perform a selection of her poetry at the opening. Also performing at the opening will be members of Street Poets Inc., a non-profit organization that provides poetic license and oulets to "at-risk youth in the juvenile detention facilities, schools and streets of Los Angeles County to discover and develop their voices as writers, artists and human beings."

Pope received her Masters in Design in 2010 from the School of the Art Institute of Chicago – as a recipient of a Full Tuition Merit Scholarship -- and her Bachelors in Fine Arts from the same institute in 2003. In the past eight years, her work has been included in many group exhibitions, including those at the Evanston Art Center (IL), Boomerang (IL), Swimming Pool Projects (IL), Museum of Contemporary Art Chicago (IL), the School of the Art Institute of Chicago (IL), and The Morgan Conservatory (OH). Her work is included in the permanent collections of the Museum of Contemporary Art San Diego (CA), Honolulu Museum of Art (HI), and Sweeney Art Gallery, University of California Riverside (CA).