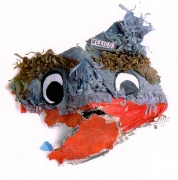 Chuck Ramirez was born in 1962 in San Antonio, TX where he continues to live and work. With a background in graphic design, Ramirez balances careers in the commercial and fine arts. Since the mid-1990’s, Ramirez has shown in a range of venues in Texas, including San Antonio’s Sala Diaz, Blue Star Art Space and ArtPace. He was included in UTSA’s Synthesis and Subversion – A Latino Direction in San Antonio Art, Boy’s Toys at the Arlington Museum of Art, Revelations at the Dallas Visual Art Center and Tres Proyectos Latinos: Memory Frames at the Austin Museum of Art.

As artist who is a graphic designer, Ramirez processes and deconstructs the media world in which he lives. His work employs visual and conceptual techniques that are found in contemporary advertising and package design. Using typography and digital imaging technology, Ramirez isolates and recontextualizes familiar objects and texts to explore issues that are both personal and socio-political, always with a sense of humor. Earlier work has investigated the complexity of Latino identity and visibility, queer politics and the AIDS crisis.

In the new Piñata Series, Ramirez presents large photographs of piñatas as a synthesis of personal, narrative and social issues. The images invite laughter and horror. The isolated and colorful objects transform the language and power of advertising into a call for compassion, expression and self-actualization.