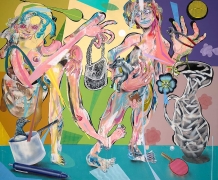 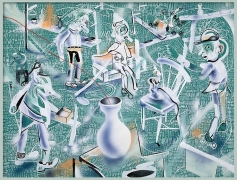 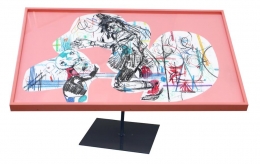 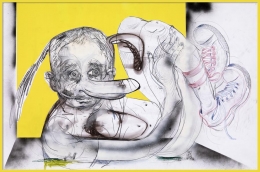 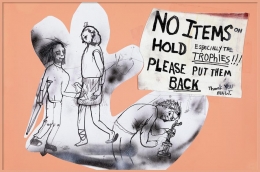 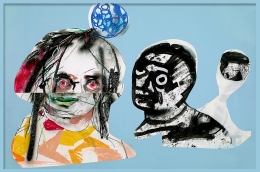 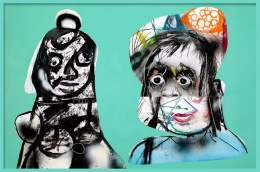 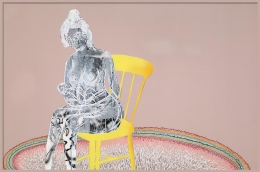 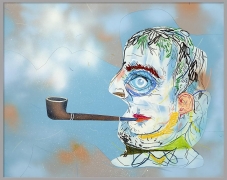 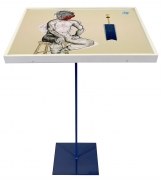 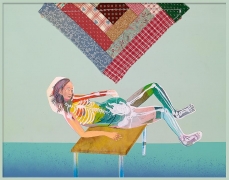 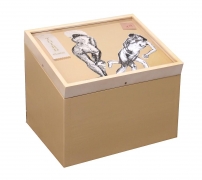 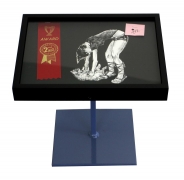 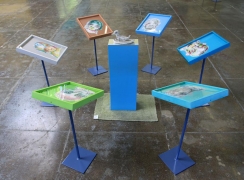 Mark Moore Gallery proudly presents "Open to the Public,” an expansive exhibition of mixed-media drawings, assemblage, photography, video, and installations by the Clayton Brothers. Consisting of brothers Rob and Christian Clayton, the duo examines the mythos, culture, and visual language of an archetypal second-hand store located near their studio. Drawing from their observations of the venue and its visitors, the brothers entwine their independent approaches, styles, and palettes into works that operate as co-authored epics – which are rife with reoccurring motifs, gestures, and figures. The end result is a drama of shared experiences that fuse the concept of self with that of the communal, both in subject matter and practice.

Hailed as a thrifting mecca for several decades, Sun Thrift Store in Sunland (CA) draws its share of both unusual characters and the commonplace man - all partaking in the hunt for trash-turned-treasured objects. For this exhibition, the brothers appropriate not only the trinkets and discarded paintings retrieved from the business, but also the handmade signage, categorical displays, and shopper behavior. Unlike the polished and elaborate paintings that the brothers are known for, anonymous figures are drawn with stark immediacy – personalities that correspond with a series of projected candid photographs of perusing customers and muted wall spaces. Acting as flâneurs or urban observers, the brothers investigate both the construct of “thrifting culture” as well as the members that form this unique microcosm of consumption. Taken as a whole, the exhibition draws upon the subject matter of the everyday as a window into contemporary Americana. Through a nonpartisan lens, "Open to the Public" explicates the people’s narrative as a universal struggle to create, cherish and ultimately abandon.

Rob (b. 1963, OH) and Christian (b. 1967, CO) Clayton both received their M.F.A.s from Art Center College of Design (CA). They have had solo exhibitions at the Pasadena Museum of California Art (CA), and the Madison Museum of Contemporary Art (WI) in addition to shows in Houston, New York, Beijing, Los Angeles, and Miami. Their work has also been included in shows at the Museum of the Moving Image (NY), Santa Monica Museum of Art (CA), Laguna Art Museum (CA), Kistler Beach Museum of Art (KS), Corcoran Museum of Art (DC), and the Dallas Museum of Art (TX), among others. They have also participated in more than twenty visiting artist lectures around the world. The artists both live and work in Los Angeles, CA.