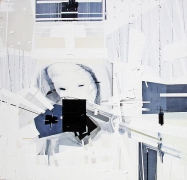 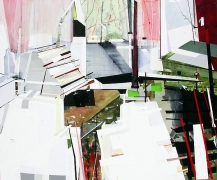 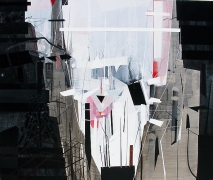 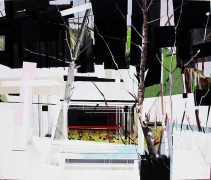 Mark Moore Gallery is pleased to present new works by painter Dimitri Kozyrev in the Project Room. Kozyrev's abstract and fragmented picture planes depict landscapes that exist in a Cubist spatial limbo. By denying the one point perspective traditional of the genre, Kozyrev collapses the linear narrative of space and time, instead presenting a shifting spatial dynamic of concrete objects and random shards of color. The viewer is offered glimpses of tree here, road there, as if perceiving the scene from a moving vehicle. The resulting canvases deterritorialize our perception as they give form to the gaps in our attention. Kozyrev's works act to represent memories of places we may have only visited once, or those we may have simply constructed from fragments of news stories, photographs or our own imaginations.

Instead of a picturesque or panoramic spectacle, we are made more aware of vast expanses of cool, billboard-like colors which "invade" the scene so that it is often difficult to discern the dividing line between nature and simulacrum, sky and earth, foreground and background, aerial view and ground-level perspective.
Colin Gardner

Dimitri Kozyrev received his BFA from Ohio University (Athens, OH) and his MFA from University of California (Santa Barbara, CA). He has exhibited extensively throughout the United States and internationally. His work has been reviewed in numerous publications, including the Los Angeles Times. Lost Edge will be Kozyrev's first solo exhibition at the Mark Moore Gallery. Kozyrev lives and works in Tucson, AZ.