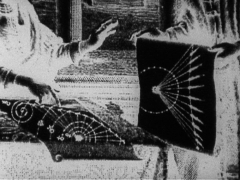 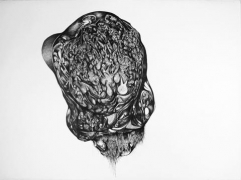 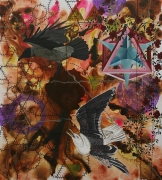 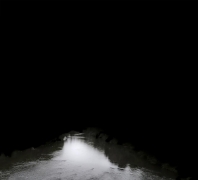 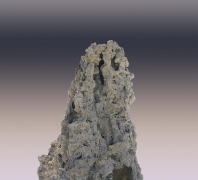 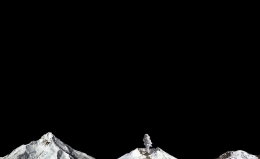 Mark Moore Gallery and guest curator Caryn Coleman present "Empty Distances," a group exhibition featuring works by James Aldridge, Darren Banks, Sean Higgins, Deborah Stratman, Alan Warburton, and a selection of episodes from "The Twilight Zone." Playing on Eugene Thacker's idea of horror as the "paradoxical thought of the unthinkable," Coleman has meticulously composed a show that illustrates the visualization and simultaneous abstraction of the unknown. Through an assortment of drawings, paintings, photographs, and videos, the artists in "Empty Distances" delve into creative perceptions of "the void" – a nebulous space that can refer to post-apocalyptic, pre-civilization, or even psychological vacuity.

"This exhibition stems from early 20th century theologian Rudolph Otto's phrase 'empty distances,' and his notion that the very act of depicting the void in pictures establishes darkness and silence as subject itself. The artists in "Empty Distances" vary in how they depict emptiness, but all evoke an imagining of this post-human existence. Black metal, horror films, science fiction, scientific research, and magical realism are all influences; pulling the viewer into a speculative new world."

These physical and mental chasms are astutely manifested in James Aldridge's (UK) Black Metal Theory-infused paintings and works on paper – which contend with our societal reliance on images to determine the natural world – as well as Darren Banks' (UK) ink on paper "Blobs," which act as tropes for the all-consuming fear of the unknown. Similarly, Sean Higgins' (CA) manipulated photographs assume intervening roles in the creation of landscape and cosmic imagery, while Deborah Stratman's (IL) black and white film, "…These Blazeing Starrs!" (2011) depicts the macabre struggle for power between mortality and catastrophe. In using technology to visualize a true "world-without-us," Alan Warburton (UK) animates the ghostly aesthetics of vacancy, using z-depth images to reference our cultural shortsightedness. Finally, Coleman will present several episodes from the classic sci-fi television series, "The Twilight Zone" (1959 – 1964) – created by Rod Serling. As an overarching depiction of fear and the unknown, the featured episodes in Empty Distances best exemplify Serling's cautionary narratives, which often oscillate between the horrific and fantastic. Despite being depicted as thrilling events in a parallel universe, Serling's tales ultimately become allegorical omens for our own impending realities; perils for which we are often to blame.

Caryn Coleman (b. 1977, Tampa) received her MFA in Curating – with distinction - from Goldsmiths College (UK). She focuses on the intersection of cinema and visual art with a focus on horror film’s influence on contemporary artists. She currently works in the Programming Department at Nitehawk Cinema and is the co-editor of the philosophy journal Incognitum Hactenus. She is the 2012 Creative Capital/Warhol Foundation Art Writers Initiative grant, and has curated exhibitions throughout the United States. Coleman lives and works in New York.