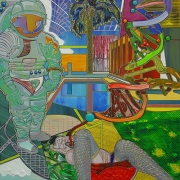 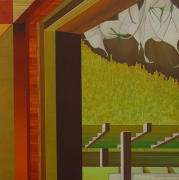 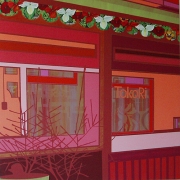 Mark Moore Gallery is pleased to announce works by Christoph Schirmer and Aurelia Gratzer, in conjunction with Brunnhofer Gallery in Linz, Austria.

Schirmer’s paintings are a seemingly chaotic burst of color and form, from which emerge words, sci-fi images and pop icons. With this visual assault Schirmer creates Aleph-like visions where the past, future, present, space, reality and fiction all collide and exist simultaneously. In contrast, Gratzer’s work verges on realism. Her paintings depict minimalist interiors as abstract wedges of color, as though she is paring down reality to the bear minimum. The result appears like a photo negative, blocks of color and solid line punctuated by the occasional twisting vine or loose brush stroke.

Christoph Schirmer and Aurelia Gratzer both received MFAs from The Academy of Fine Arts, Vienna, Austria. They have exhibited widely throughout Europe, often in the same shows in Austria; both were included in the 2003 Istanbul Student Triennial. Schirmer has exhibited numerous times in Germany and Gratzer in Ukraine. This show at Mark Moore Gallery will be the first time exhibiting in the United States for both artists.

For more information on these artists or the opening event, please contact the gallery at 310.453.3031 or info@markmooregallery