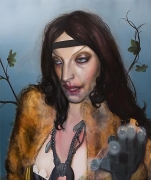 Mark Moore Gallery is pleased to present new paintings by emerging talent, Gavin Nolan, in our Project Room. Nolan's unsettling portraits stray at the edges of hyper-realism, his subjects' outlines blurred by the surreal. Informed by a slue of popular media, from album covers to gossip magazines, as well as the Old Masters and the people around him, Nolan's work is entirely contemporary in its aesthetic yet remains imbued with a traditional sophistication. Like scenes from a party overstayed, where the wired enthusiasm of others simultaneously lures and disgusts; Nolan's paintings depict self-indulgence embraced and rejected, both a celebration and critique of all that is loved and loathed: fashion, beauty, money, celebrity, power and religion.

"I build the paintings through a mixture of chance and control. I like them to slip between being a sloppy mess and a finished recognizable whole. I use thin glazes, layer after layer, trying to retain the original under painting."
Gavin Nolan

Gavin Nolan received his BFA from Loughborough University School of Art (Loughborough, UK) before going on to earn his MFA at the Royal Academy of Art in London. Within the past four years he has participated in shows in London, Copenhagen, Tokyo, Rome, New York and Los Angeles, to name a few. His work has been reviewed in publications such as Modern Painters and Time Out. Nolan currently lives and works in New York, NY. This exhibition at the Mark Moore Gallery will be his first solo exhibition.