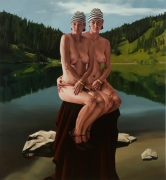 Mark Moore Gallery is pleased to present new paintings by Jennifer Nehrbass in the Project Room. Nehrbass’s opulent yet unsettling realist portraits of women are a complex presentation of voyeurism, beauty, femininity, sexuality and independence. Although obviously influenced by glossy, stylized fashion photography, her paintings seem to document a performance, rather than a pose; she catches her subjects in action, presenting then as more than simply inactive props for their own beauty. Thus Nehrbass both supports and subverts traditional notions of the gaze and the female portrait, echoing the complexities and contradictions of being a woman in contemporary society. She explores notions of formulated female identity, and the resulting difficulty of a sense of self, free from media influence and preconceived ideals. Her work reflects a desire to disarm and subvert accepted ideals of beauty by presenting the unexpected and often confusing, even distasteful. By seeing these elements of beauty in settings we do not understand or expect, we are forced to reconsider and hopefully to question why our expectations are so limited, so ingrained that we cannot find beauty in the other.

[Nehrbass] turns the pose of the helpless female inside out. Her figures exude a private sexuality that is neither passive nor aggressive […] With a self confidence detached from manly desires, Nehrbass’ women are independent characters in their own right.

Jennifer Nehrbass received her MA from New York University, NY and her MFA from the University of New Mexico, NM. She has exhibited widely across the United States, most prominently in New Mexico and New York; her work has also been exhibited in Europe. She lives and works in Albuquerque, NM.