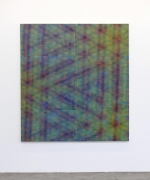 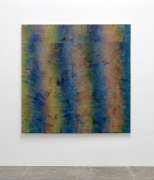 Mark Moore Gallery is pleased to present an exhibition of new paintings by Julie Oppermann. Coming from a background in neuroscience, Oppermann is primarily concerned with exposing the immaterial and subjective aspects of visual perception. By offsetting layers of similar patterns atop one another, she creates complex and stimulating compositions of moiré interference patterns that create intensely sensory experiences.

Existing at the nexus of science, art, and technology, Oppermann's work is rife with paradox. While the initial patterns are generated digitally on the computer, the paintings themselves are created by hand using a stencil and rollers. Oppermann’s approach is at once rational and analytical, yet also intuitive and hands-on. She employs a variety of painterly and gestural techniques that rough-up and humanize her compositions. “I want my work to be organic, something that's made by a person and is not perfect, something more dynamic,” she says. In this way, the artist creates images that appear to emulate the digital, while remaining deeply ensconced within the decidedly un-technologic practice of applying layers of paint to a surface. Beyond the pigments and the patterns, she utilizes perception itself as a medium in her work. Sharp color contrasts through the overlapping rasters electrify her moiré patterns, creating paintings that elicit physical sensations in the viewer. The interference effects are the immaterial result of the human brain's inability to process the overwhelming visual information, and guarantee that no two viewings of an Oppermann composition will be the same. The viewer continues to encounter new and disorienting visual "glitches," such as illusions of motion, vibration, or a shifting perspective. Accordingly, Oppermann's work operates at a supra-perceptual level, in which the sensory reward of her images is the result of interfering with the viewer's ability to perceive them.

Julie Oppermann lives and works in Berlin. She received her BFA from The Cooper Union, and a Master's in Neuroscience from the University of California, Berkeley. In 2012 she completed a residency at FAAP in São Paulo, an academic exchange with Professor Robert Lucander at the Berlin University of the Arts, and completed her M.F.A. at Hunter College. In 2013 she had solo exhibitions at Mark Moore Gallery in Los Angeles, and Galeria Árnes y Roepke in Madrid, and in 2014 she had a solo exhibition at Galerie Roepke in Cologne. Her work is included in numerous public and private collections, including the Museum of Fine Arts Houston (TX), and the Museum of Contemporary Art, San Diego (CA). 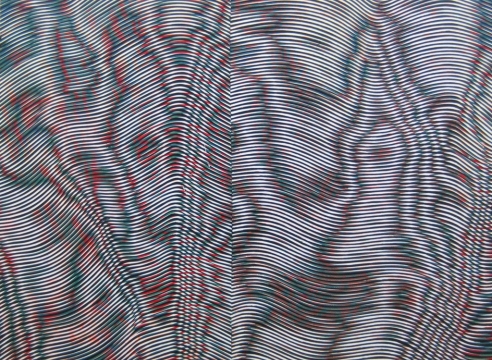 Julie Oppermann
Back To Top