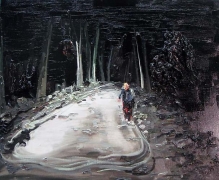 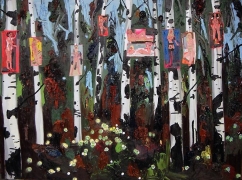 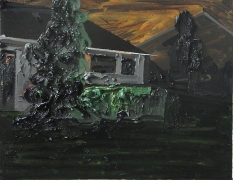 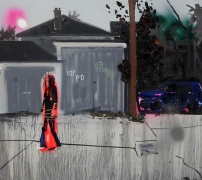 Mark Moore Gallery is pleased to present new paintings by Canadian artist Kim Dorland in the Project Room. Kim Dorland's paintings depict the real space of his hometown suburbia; free of romantic delusions, but perfectly accepting of quiet, unexpected beauty. His refusal to remain faithful to one medium or approach plays into the symbiotic nature of his work, the deadness of acrylic, the sheen of spray paint, the density of oil paint all convene to engage the viewer. The loose yet identifiable scenes are interjected with areas of heavy abstract impasto, adding to the raw, fleeting quality of his canvases. Dorland is by no means trying to entice his audience with a nostalgic vision of utopia, but rather he cultivates reflection, upon a quiet moment, a party ended, the fleeting beauty within the often ugly and mundane.

"In Dorland's images of suburban realism, one may discover a sense of disappointment or a yearning for simpler times. His paint-handling suggests these simpler times are still out there, and he allows them an exuberance rarely seen on canvas. Though it may seem simplistic, we are all in need of a reminder that beauty does still exist over the fence."
Melissa Berry

Kim Dorland received his BFA from the Emily Carr Institute of Art and Design in Vancouver, Canada. He went on to complete his MFA at York University in Toronto, Canada. He has exhibited his work widely in group exhibitions throughout the United States and Canada and has had solo shows from Italy to California. He is the recipient of numerous grants and has his work included in the Sander Collection in Berlin, Germany. Dorland lives and works in Toronto, Canada. This will be his inaugural exhibition at the Mark Moore Gallery.