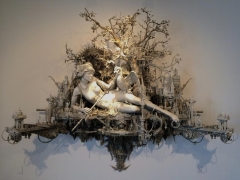 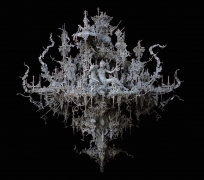 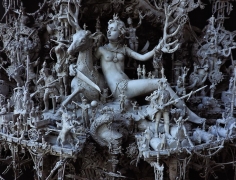 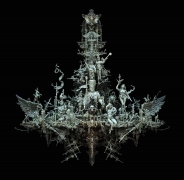 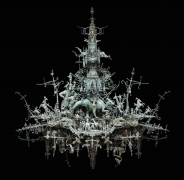 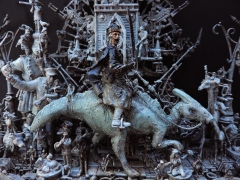 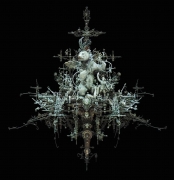 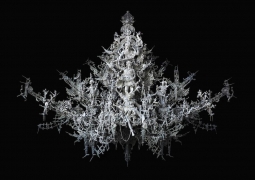 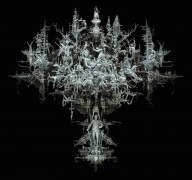 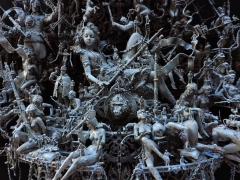 Mark Moore Gallery proudly presents "Antiquity in the Faux," a sophomore solo exhibition of mixed-media assemblage works by artist Kris Kuksi. Oftentimes appearing as unorthodox altarpieces, Kuksi's sculptural wall works have been heralded for their superabundance of detail and narrative – as several theatrical microcosms may converge to produce one sensory fable. Teeming with struggle, conflict, faith, sexuality, and power, his works afford the viewer a ringside seat for allegorical spectacle as the spheres of fantasy and reality collide.

Kuksi’s ornate compositions call to mind the excessive intricacies of Art Nouveau or Baroque aesthetics. From a distance, these sculptures are deceptively decorative, but upon closer inspection Kuksi's grotesque realities emerge. In some works, central figures preside over mounting chaos below; infinitesimal creatures, soldiers, and machinery collide with their larger counterparts, and forge a warscape void of time and place. In others, Kuksi achieves a precise structural equilibrium in which his minute armies become a single enormous figure – as if the proverbial Trojan Horse is operated by its most aberrant inhabitants. Reminiscent of Hieronymus Bosch’s “Garden of Earthly Delights,” Kuksi’s characters inhabit a world rife with sin, corruption, and tragedy; an existence not so alien to our own.

The artist obsessively collects and arranges a variety of cultural flotsam and jetsam – figurines, model parts, collectibles, craft parts, and jewelry. The carefully curated and protracted collection process required for each piece renders each and every item a precious and integral object in these apocalyptic dioramas. The political, spiritual, and material conflicts captured within these shrines expose Kuksi’s disenchantment with the past, present, and future state of the world. His dimensional works are a macabre reflection that mirrors our own (ultimately futile) quest for accumulation and prowess. Yet, despite the overwhelming despair and irredeemable fallacies of man that Kuksi explores, a romantic and wistful quality perseveres in the amalgamation of these tiny, independent elements. As is found within our own cyclical global history, the embattled often find light within their trials.

Born in 1973 in Springfield, Missouri, Kris Kuksi earned his BFA and MFA in painting at Fort Hays State University. He also studied internationally while enrolled in programs in Germany, Austria, and Italy. His work has been featured in over 100 exhibitions worldwide, including those at La Halle Satin Pierre Museum (Paris), Museum of the History of Science (Oxford), Williamsburg Art and Historial Society (New York), and the Smithsonian National Portrait Gallery (D.C.), as well as within numerous international art magazines and fictional book covers. Solo exhibitions of his work have been presented in New York, Los Angeles, Seattle, Basel, Toronto, Berlin, Washington D.C., and Kansas City. The artist lives and works in Lawrence, Kansas, and is also represented by Joshua Liner Gallery (NY).