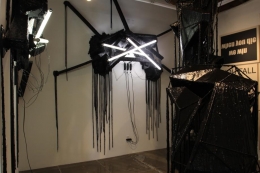 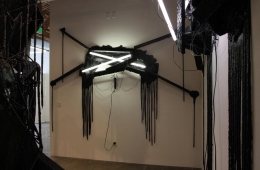 Mark Moore Gallery presents new work by interdisciplinary artist, Preston Daniels, in Gallery Two. Daniels produces works that demonstrate the humanization of architecture. In Over Under, Daniels continues to explore the gestures of architectural destruction and environmental collapse through a series of installations, paintings, and sculptures – all of which employ the use of acrylics, foam, urethane and fluorescent lighting. Over Under refers to a type of shotgun, commonly associated with hunting and sporting. Daniels uses the blunt reality and cultural trope of the shotgun to create an aesthetic bridge between human failures (such as natural disasters, nuclear destruction or war) and their imagined remnants in the form of structural ruins. His interest in taking apart the principals and fundamentals found in architecture - text, images, and structure- is translated in a crude, apocalyptic aftermath, replicating a nightmare where fantasy and reality are blurred.

The focal points of the exhibition are two large-scale, wall sculptures entitled Campfire Barricade (2013-2014) and Debris Pile (2013-2014). Referencing apocalyptic tableaus captured in popular sci-fi motion pictures, these two sculptures resemble three-dimensional excavations of war barricades. Unlike Gordon Matta-Clark, who was interested in metamorphic gaps and dismantled architectural structures, Daniels is attracted to the dark, violent, biomorphic outcome manipulated in the existence of similar structures. His sculptures capture the slow and static moment of collapse and decay. Daniels continues his investigation into the breakdown of the practices and principles of construction through Painting With A Shotgun (2014) and The Grand Morphosis (2014). The collapse Daniels refers to is similar to the rise-and-fall of the Pruitt-Igoe urban housing project in St. Louis, Missouri. Shortly after its completion in 1954, the urban housing project began to decline due to overcrowding, crime, and economic restraints resulting in an epic demolition. The project has become an icon of failure through its advocacy of urban renewal and public policy planning. In Painting With A Shotgun, Daniels creates a cluster of archetypical images and text on canvas in response to these architectural and public policy catastrophes. The artist also makes reference to the L.A. architecture, and how its iconic buildings have become the voice and export of the city. The four sculptures that make up this body of work are Daniel’s observation on a building’s reaction to the psychological temperament of a space in which it inhabits. Much like the Pruitt-Igoe project, Los Angeles has been through many revitalizations and deteriorations. It is through these series of works that Daniels regards the lifecycle of architectural structures through the progress and decline of the environs around it.

Preston Daniels (Virginia, b. 1983) received an MFA at California State University, Fullerton. He is currently the studio assistant for Los Angeles-based artist Richard Jackson, and has collaborated with artist and film director Tim Burton for Burton’s retrospective at the Los Angeles County Museum of Art (CA) and Museum of Modern Art (NY). He has been featured in group exhibitions at Laguna Art Museum (CA), Sixpack Projects (CA), Andi Campognone Projects (CA) and Cerritos College Art Gallery (CA). He works and lives in Long Beach, CA.