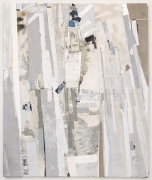 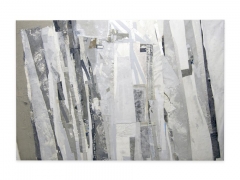 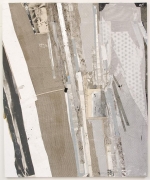 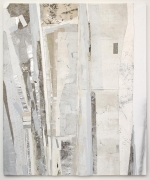 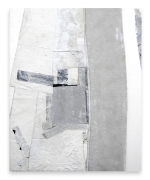 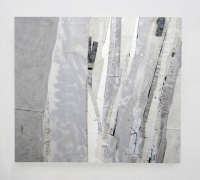 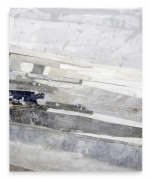 Mark Moore Gallery is proud to present "The Standard Model," an exhibition of mixed-media painting and sculpture by Ryan Wallace. Elaborating on the aesthetic and conceptual content of his previous show, Redactor, Wallace has developed a body of work that investigates notions of materiality, spontaneity, and the plasticity of perception.

Wallace’s compositions embody a metaphysical dichotomy both on an aesthetic and conceptual level. Visually, his stratified abstractions are simultaneously evocative of both aerial and microscopic perspectives, yet they are assembled from recognizable “life size” elements of industrial materials. This duality of material quality is central to Wallace’s practice and is further evident in his methods of creation. By allowing compositions to evolve organically from the interplay of materials that have been cast off, removed, redacted from previous works, Wallace puts to practice the philosophical paradox of creation through removal, wherein the waste of one system becomes the structure of another.

Similarly, the sculptural works (which Wallace will show in Los Angeles for the first time), are made of statuary hydrocal and concrete compounds, and are designed to exploit the material failure and disintegration of their respective materials. They are intentionally misused for the aesthetic qualities of their failure. In turn, the detritus from this process is frequently integrated into Wallace’s painting, further blurring the line between the two practices. “ I'm making sculpture to create underpainting. [The sculptures] are infused with the stuff of painting; forced and compressed into sculptural blocks rather that the sculpture being found and removed from within the block.”

Wallace received his BFA from Rhode Island School of Design (RI). He was the 2011 recipient of the Pollock Krasner Foundation Grant, and has had solo exhibitions in Copenhagen, Los Angeles, San Francisco, and New York. He has also shown work at the Frans Masereel Center (Belgium), Torrance Art Museum (CA), Katzen Arts Center (D.C.), Yerba Buena Center for the Arts (CA), and numerous other venues around the world. His work is featured in the public collections of the U.S. Department of the Treasury (D.C.), the Museum of Modern Art (NY), the Museum of Modern Art, San Francisco (CA), and the Cleveland Clinic (OH), among others. Wallace is also represented by Cooper Cole Gallery (Toronto), Marianne Friis Gallery (Copenhagen), and Susan Inglett Gallery (New York). The artist lives and works in New York.