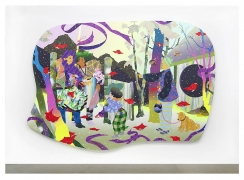 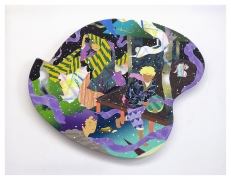 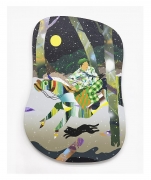 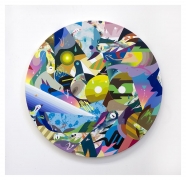 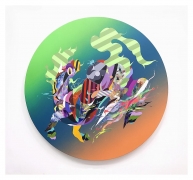 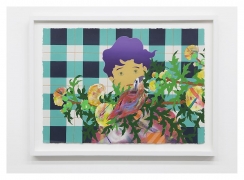 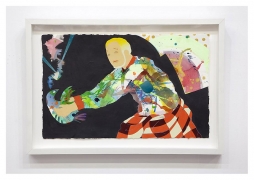 Mark Moore Gallery is pleased to announce "New Work," a presentation of paintings by artist Tomokazu Matsuyama in the Project Room. The exhibition will mark the artist's first solo show with the gallery, as well as within Los Angeles. Featuring seven new vivid compositions and one small-scale sculpture, the exhibition will showcase Matsuyama’s dexterous combination of graphic sensibility and Japanese iconography.

Drawing upon his own bicultural experience of living in both Japan and the United States, Matsuyama explores issues of shifting identity. Appropriated imagery from Japanese folklore and art history seamlessly intertwine with western painterly influences such as Abstract Expressionism and, more contemporaneously, street art. Small shards of geometric shapes forge larger composite forms; exaggerated auspicious caricatures backdropped by varying patterns and frenetic Pollock-like splatters. As if constructed by collage, each figure floats against an atmospheric ombré background reminiscent of a dusky sky. Each painting achieves balances through equal parts chaos and control, the result of which is a hyperkinetic tableau with a dream-like mood. Referencing Japanese traditionalism, Matsuyama's creations begin with a focus on recollection and storytelling through allegorical figuration. Fused with these tropes are Matsuyama's western aesthetic influences - as seen in his pop-cultural use of illustrative technique and florescent color palette. His unconventionally shaped paintings act as statements about today’s larger global society, which refutes autonomous cultural boundaries by embracing notions of fusion and hybridity.

Matsuyama was born in Tokyo in 1976 and received his MFA in Communications Design from the Pratt Institute (NY). He has had solo exhibitions in New York, San Francisco, Tokyo and Osaka, including his most recent at the Katzen Arts Center in Washington D.C. His work can be seen in the public collections of the Cosmopolitan Hotel Group (NV) and the Royal Family (Dubai, UAE), The Standard Hotel (Andre Balazs Group) as well as commissioned projects with Burton Snowboards, LeSportSac, Nike, and Levi Strauss brand collections. He is also currently one of three finalists for the Japanese National Culture and Arts Affairs award, the most generous grant given to a Japanese artist living abroad. He lives and works in New York City (NY).