Jackie Tileston
Everything, in your favor, 2007
oil, mixed media on linen
60 x 72 inches 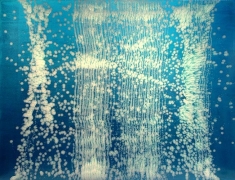 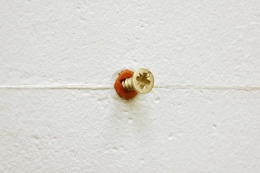 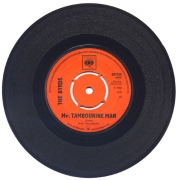 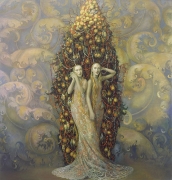 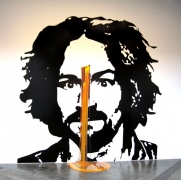 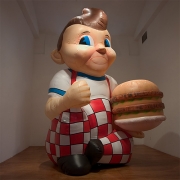 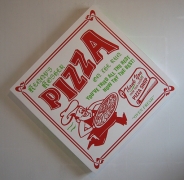 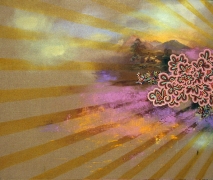 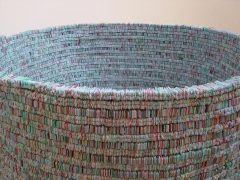 From the mundane to mortality, artists address transience as a way of coming to terms with change.

This year, for its second installment, Ultrasonic International is providing a forum in which to engage with and consider the almost paradoxical notion that one of life’s few consistencies is its very transience. The show will bring together twelve artists whose work, although stylistically and thematically very different, is inextricably linked with notions of transience, temporality, and impermanence. The show will propose a dialogue amongst the works regarding this theme, and yet aims to allow each work to be considered as a single piece with its own independent agenda.

In participating in this dialogue and considering such ideas relating to transience, we must eventually address and confront our own impermanence. Death and mortality have been a perennial facet of art; thus the show will remain a relevant continuation of established themes and will provide a means to consider how such themes manifest themselves, consciously or unconsciously, within contemporary art.

Through an interplay of chance and conscious manipulation, Brunswick produces abstract paintings that speak of entropy and regeneration. The fluidity of his medium acts as a metaphor for the instability of meaning and belief, whilst at the same time acting as a tangible attempt to manifest both.

In the tradition of tromp-l’oeil and the readymade, Collis makes subtle interventions into the gallery space, which unsettle the accepted models and codes of gallery expectations and behavior. She choreographs the viewer’s movements in an attempt to question the procedure of gallery attending. What are usually assumed to be the remnants and tools of a missing exhibition are the focus of Collis’s work, the byproducts of installation carefully crafted from precious gems and metals. By presenting these conceptually loaded background objects she blurs the distinction between art and everyday life, leaving the unsettled viewer unsure of what they are looking at.

Working directly with found objects - namely vinyl records, album sleeves, and other pop culture ephemera – Dolphin arduously scratches a transcription of lyrics by the relevant recording artist - from just a few songs, to as much as their entire back catalogue – onto the object. In performing these mind blowing feats, he defaces and destroys these objects as products, transforming them into an artwork and therefore embedding them with an entirely new set of fetishes and rules. In a sense, Dolphin’s inscriptions reify the transitory involvement we have with music, and its fluctuating presence in our personal histories.

The photographs of Gilles present an objective lens through which to consider concepts of non-communities, un-tethered lives, rootless isolation, economic failure and the lacuna of social safety nets. These visual observations attempt to prompt the viewer into questioning and ultimately critiquing the sociopolitical responsibility of contemporary America. Gilles trawls back streets and urban edges for below-the-radar, nomadic existences to document; yet the observational aesthetic of the resulting images is balanced by virtue of formal concerns regarding color and composition. His panoramic works prompt the viewer to consider the significance of such transient lives, whilst harking back to Old West notions of freedom.

Akin to Magical Realism, Heffernan’s lush self-portraiture utilizes a myriad of art historical references to present a sensual interior narrative, a self-allegory whose half-hidden political agenda is the literal background of the paintings. The dark, Grimm fairy tale-like undercurrent transforms her aristocratic, operatic portraits into a contemporary vanitas or memento mori, acting as both a stylized fantasy and a Bosch-like warning.

Kozyrev regards the current political and military polemic as relative to past Totalitarian and Imperialistic regimes. He therefore associates contemporary events with the climate of suspicion and censorship (and thus instability) that prevailed in his homeland during the last century, especially in relation to art.

The series entitled Lost Edge focuses on notions of the avant-garde and both the military and artistic implications of the phrase. A Modernist and Constructivist re-arranging of pictorial space references artistic movements at the turn of the last century and acts as a reflection on the censoring of the Avant-garde artists within the increasing totalitarianism of the early Soviet Union. This body of work illustrates Kozyrev’s contemplation of this history in an attempt to critique, through association, the current state of affairs in both the military and artistic spheres.

Lewis’s work explores the power of cultural icons and their relevance to contemporary equivalents of the religious sublime. By equally depicting religious nobility and pop-culture icons, he levels their significance as central characters within the three millennia of narratives that we construct and repeat. By using personas that range from the charismatic, to the unsettling, to the worshipped he throws into question the cultural paradigms of contemporary culture.

Ozymandias Weeps refers to the Shelley poem, Ozymandias, in which a traveler stumbles across the wreck of statue in a vast wasteland of desert, yet the statue has an inscription that reads "My name is Ozymandias, King of Kings, look upon my works, ye Mighty, and despair!". Person’s inflatable sculpture reflects upon a history of cultures that have been lost, destroyed and leveled over time. His works embody the idea that a brief spell upon the earth is all we can expect and that mortality is the great leveler. This work literally weeps a lament for its lost prowess as the mighty cultural icon it once was; it is a contemporary and humorous ruin, ironically inflicting the knowledge that all must pass.

The transient ephemera of everyday life – receipts, family medical records, produce stickers, grocery package and twist ties – are all collected by Welty. In choosing to work with these materials, she documents the world in which we live, mapping our environments in the hope finding beauty, humor, and joy via the throwaway detritus of our lives.

Seliger works with paint and canvas to compose three-dimensional structures that represent industrially produced commercial packaging and quotidian artifacts on an enlarged and distorted scale. His works provoke the viewer to reflect on the relationships between content and packaging, hand-made and mechanically produced, past and present and upon Western culture’s constant use of the disposable and desire for the new. Yet it does so always with playfulness, wit and formal aptness. The dynamic between Seliger’s practice – rooted in the realm of the meticulously handmade – and the highly ubiquitous nature of the packaging he typically portrays, provides both a new way of looking at these everyday objects and a way of thinking about the mimetic and transformative qualities of painting.

Tileston’s paintings offer a space in which multiple dynamics can coexist creating a new, universal space that she defines as a “heterotopia”. Her work draws upon numerous sources, such as the history of abstraction, physics, traditional eastern imagery, Chinese and Tibetan landscape motifs, and digital imaging. The resulting images harness the flux between empty and full, atmospheric and graphic, abstract and figurative, quiet and psychedelic to create a harmonious space of balance.